Just wanted to eat something nice

Was supposed to go on a road trip on the first day of November. Went all the way to KL city, but had a change of plan after 1 phone call. Already came all the way out and it’s lunch time, went to hit the nearby mall that would be less crowded on a weekend. So Midvalley it was.

Next question would be ‘What to eat?’.

The question started from the moment we have decided to go to Midvalley until parked the car to walking around the mall. By default, if I don’t have any cravings for any type of food, it’s always Japanese food. I could think of Sushi Zanmai. But then at the corner of my eyes, I saw Ippudo. I only tried Ippudo once and it was delicious!

So at first thought of just checking out the menu and price. Little did I know, the next thing, we were escorted to our table. I was there for the ramen only. But lo and behold, there’s other dishes to try out too.

Such sinful and yet at the same time so satisfying.

Though the bowl is small, but man, that was enough as 1 serving. Sometimes, quantity is not everything. The mentai and salmon was melting in my mouth.

Tried their seasonal chef promotion too.

Anything that has a pork dish is always a plus point for me. 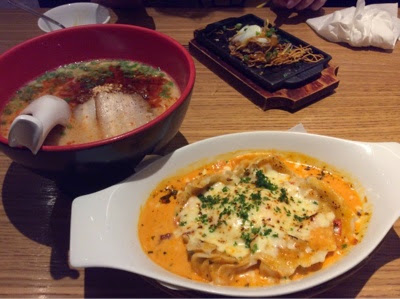 In total, the damaged done for 2 person is almost RM100. That’s only like once in awhile I get to really indulge in such expensive dining experience.
‘Nuff said. Tata~